Change the future with pecan nuts.

Golden pecan is a brand launched by Machiko Maeuchi who is a representative of the long-established chocolatier ‘Salon de Royal’, since 1935. It was established to deliver a healthy and prosperous life with pecan nuts which is said to have effects on anti-aging and alzheimer’s disease, etc. 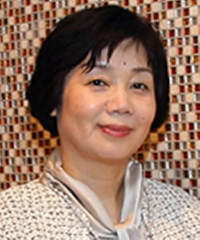 "I earnestly desire that many young people filled with conscience will be raised and sent out by our school."

I decided to take on the role of the engine to promote the project and make it a sustainable effort by earning profits as a business.
I participated in the project under the philosophy that I carry out reforms themselves.

As a third generation, I succeeded the family business founded in 1935, which majored in baked confectionery and chocolate, and "pecan nut chocolate" released in 2010 became one of the popular products.
One third of the 300 tons of pecan nuts imported into Japan is brought to your mouth as this "pecan nut chocolate". This pecan nut is very nutritious, and it is said that it contains antioxidant substance among all nuts. Antioxidants are said to have effects on anti-aging, lifestyle diseases, and dementia prevention. Through its pecan nuts, we aim to solve agriculture regeneration , employment creation, regional creation, and social problems caused by aging in the Rikuzentakata area.